Sometimes books come along at just the right time. One such book has been Activist Theology by Robyn Henderson-Espinoza which my wife and I have been listening to on audible as we have been driving round Tasmania. I can’t recall anything quite like it.

When I first came to this country (USA) and started to teach at Union Theological Seminary, the faculty and students asked me again and again: What has your theology to do with your being a woman? I did not know how to respond. Of course I knew of some things I intensely disliked in male theological circles – namely, the springing from one quotation to the next in their writing without the courage to use personal discourse; the almost anal obsession with footnotes, called ‘scientific style’; the conscious – but much worse, the unconscious – craving for orthodoxy and shelter it offers to the professional theologian; the neglect of historical reflection in favour of glib talk about ‘historicity’; the failure to evaluate and reflect on praxis.

I also felt a certain lack of candour and honesty, and I sensed no need to be personally exposed to the truth of Scripture and tradition.”[i] (p.xvi)

None of these criticisms can be levelled at Robyn Henderson-Espinoza. Their life transparently informs their work. Robyn describes themself as a transqueer activist and Latinx scholar with white-passing privilege because of the colour of their melanin who has had to rely on food stamps to survive.

They work at the interface between the academy (university defined widely), the church and local activist movements. While at one level this is not new, (I think of Jurgen and Elizabeth Moltmann, and Jacques Ellul in Europe, James Cone in the USA, the South American Liberation theologians, and even Charles Birch and Veronica Brady here in Australia), their approach has a freshness, immediacy and a companionable solidarity. Their inclusion of the work of and discussion with activist poet Britt!ni “Ree Belle” Gray is one of the many highlights.

When they write about the importance of “struggle” you know that this is not a remote theological concept, but something that is integral to their life as an activist theologian. Their work then becomes nourishing emotionally as well as intellectually. Their theology is literally written onto their body, tattooed on their hands in prayer as “divine doubter”. 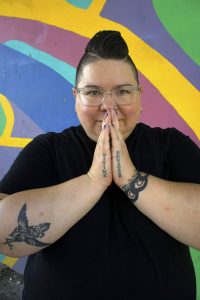 For activist theology, God is in the change that is becoming. Activist theology is thus hope filled, not covered in despair. This is the message our time needs.

A month ago, this was brought home to me when I gave a workshop for social work academics on what they could do about student poverty. Though well intentioned, many of the academics felt overwhelmed and powerless to act. This may seem strange to the outsider, for after all, academics have resources in terms of knowledge, communication skills, status and in some cases money that are far greater than those most in need. Yet it was true that the neoliberal system was putting obstacles in the way of their acting, (lack of tenure, increased workload, greater administration). More importantly, the neoliberal system sent out the message that social problems were all too hard, there was nothing that one can do.

As it happens, a week later I was called to give evidence in person to the Senate Inquiry into the Adequacy of Newstart and Related Payments. This was unusual. I am not employed by any institution, nor am I particularly well known or influential, nor do I have much power or influence. What I and a colleague did was write a submission on student poverty, (no 76), based on our research but not limited to it, that caught the attention of the Senate Committee. There are probably 1,000s of academics in Australia who are better qualified than I to have made a submission on student poverty, but with a couple of rare exceptions they did not submit. Their attention was elsewhere. They missed a valuable opportunity.

The hour in which I was given the opportunity to discuss student poverty with the Committee was a special time of grace. As always, the chair of the Committee, Senator Rachel Siewert of the Greens, was deeply respectful and concerned about the plight of the poor. Senator Malarndirri McCarthy of the Labor Party came down to welcome me into the space before the proceedings began. This certainly helped me feel at ease and calmed my nerves. Senator McCarthy, through her mother, is descended from the Garrwa and Yanyuwa peoples, whose traditional lands straddle the McArthur River and the Gulf of Carpentaria. Both Senators had clearly read my submission closely, asking insightful questions that showed an understanding of the individual and the wider policy issues. Also present was the Liberal Senator, Hollie Hughes, who unfortunately had been given the remit to promote the Government line, that 1. the best type of welfare is a job and 2. increasing income support payments was unsustainable.

Also giving evidence in the same hour was Cat Nadel from Young Campaigns. Her evidence was outstanding. When challenged by Senator Hughes on the sustainability of increasing payments she gave the best off the cuff explanation of the true meaning of sustainability that I have heard. Below is the Hansard transcript.

I would agree that young people are concerned about the future and want to see the Australian economy remain sustainable. I can really only speak for myself and the young people I work with and interact with, not for all young people. We have seen Australia go through years of what we are told has been economic growth, but we’ve also seen inequality widen deeply in that time. In my mind, a budget that is sustainable into the future needs to look after all of society and especially the poorest and most vulnerable in society. We are currently not seeing that; we are seeing the gap widen. While we are talking about how young people look into the future: we are also looking down the barrel of huge challenges to come, like climate change, and it is not clear how governments are budgeting to prevent those problems, and what implications that is going to have for future budgets. I would say that young people do want to see Australia continue to be a sustainable economy that looks after everyone, and that means we have to think about how we allocate support to the poorest in society.

This was a spine-tingling moment in the proceedings. Though the Hansard record can’t show it, there was a moment as Cat finished, when Senator Hughes was left speechless, … before she proceeded on with her next scripted question. With young advocates like this, there is still great hope in these dark political times.

Yet this hope does not come without a cost. Despite her young age, Cat must have spent years preparing for this moment. (Not just this moment of course, but any moment when her talents can be used.) Time spent studying, researching, going to meetings, organising, listening and feeling the pain of others and the environment. 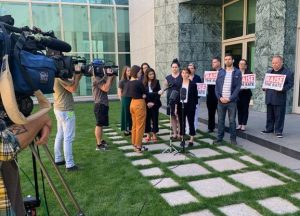 It is this cost that so few academics and church attendees are prepared to pay. Those with conservative views of course can maintain the illusion that they live in the best of all possible worlds, that they are safe and comfortable. However, those who profess progressive views present more of a problem. Why don’t more step up? In my own profession of social work, only a handful of social workers ever become involved in meaningful activism despite a commitment to social justice being written into their code of ethics. Academics, even those with tenure, rarely get their hands dirty with pressing social concerns. As for theologians, they may as well not exist in Australia. At best, the mainstream churches limit themselves to general statements that don’t offend too much.

What is the cost? The cost is a preparedness to share the pain. This is one of the meanings of incarnation, and without it, incarnation makes no sense. It means to regard status, career, security as nothing when compared to the call for justice and mercy for all: not just for humans but for the whole of creation. This seems to be the stumbling block. Progressives, like their conservative brothers and sisters can be too comfortable. They prepare their progressive thinking and their theology, use it to define themselves as not conservative, but then don’t use it often enough to address the growing injustice all round them.

The activist theology of Robyn Henderson-Espinoza does not let progressive Christians off the hook. Without activism there is no theology, progressive or otherwise, there is only a logy of empire, or of a nation, or of a cultic group. Robyn Henderson-Espinoza gives no easy answers. They are flailing about in what Dorothy Searle has called “the open horizon of Christ”.[ii] One sees at times those flashes of sparkling brilliance, but you know that to fully understand you must dive in. This is the challenge for these turbulent times. The need to dive in is more urgent than ever. Safe and steady will not do.