Witness K and the Kingdom of Heaven

Last week my heart went out to Witness K. He was a loyal public servant who was aware of a great injustice being perpetuated on our neighbour Timor Leste.

Had it not been for Witness K, the fact that in 2004, Australian security personnel from the Australian Secret Intelligence Service put listening devices in the walls of the Timorese Cabinet Offices during an Australian AusAid refurbishment program would have been buried in perpetuity. This allowed Australian officials to eavesdrop on the planning sessions concerning a Timor Sea resources treaty. This resulted in an initial treaty that was strongly favourable to Australia allowing for a 50/50 split of revenues of the Greater Sunrise fields, though the fields are far closer to Timor Leste than to Australia.

The Australian government has pursued Witness K and his lawyer Bernard Collaery relentlessly. This week, Witness K decided that he had had enough and pleaded guilty. As Bernard Collery put it, Witness K had “reached a conclusion he needs to exit the process” after “six years of seclusion, harassment and questioning”.

Witness K is a hero who spoke truth to power.

At a protest outside the Australian Capital Territory Law Courts I was handed a flyer which asked the questions. What would you regard as “Australian values”? Fairness? The rule of law? Honesty? Decency? Championing the underdog? Plain speaking? Truth? Justice?

The duplicitous treatment of Timor Leste and then the prosecutions of Witness K and Bernard Collaery would seem to indicate that these are not the values of our political and bureaucratic masters. Again and again during the protest, those involved in this shameful saga were named and called to account: Alexander Downer, John Howard, Julia Gillard, Bob Carr, Mark Dreyfus, David Irvine, Nick Warner, Woodside Petroleum, Sarah McNaughton, Margaret Twomey, George Brandis and Christian Porter.

There is something disquieting about hearing senior officials from both sides of Government being named for involvement in acts that are so clearly wrong and which run counter to what we would regard as normal decency. This was naked power being used to protect the interests of the few. There are billions of dollars involved. This was power using the law to grind down the individuals who dared to speak the truth and to call out the lie.

At one level this can breed disillusion. Yet somehow, there was also hope. The protestors, albeit a small number, were on the streets on a chilly Canberra morning protesting. This oppression of those who speak out against injustice had been foretold. Indeed, “Blessed are those who persecuted for righteousness’ sake, for theirs is the kingdom of heaven” (Matt 5:10).

The kingdom of heaven, what a strange phrase to modern ears. For progressive Christians heaven can often seem problematic. While there are a variety of reasons for this, N T Wright has pointed out that one of the reasons is the differences in the ways the Jews of Jesus time and moderns understood space and the relationship between Heaven and Earth. For moderns, heaven is perceived as far away and remote, and a God perceived in heaven is far away. However, as N T Wright points out in relation to the Temple:

Somehow, in a way most people find extraordinary to the point of being almost unbelievable, the Temple was not only the centre of the world. It was the place where heaven and earth met. This isn’t, then, just a way of saying, “Well the Jews were very attached to their land and their capital city.” It was a vital expression of a worldview in which “heaven” and “earth” are not far apart, as most people today assume, but actually overlap and interlock.[I] 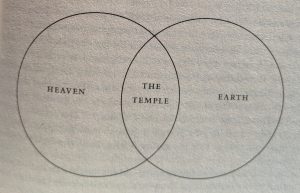 Hence for the Jews who followed Jesus, Jesus and the Kingdom of God/Heaven he proclaimed becomes the new Temple. It was the new place where Heaven and Earth met. Hence it could be both present and not yet. With this lens so much of what Jesus said and did makes more sense and becomes immediately relevant.

It is fitting therefore to say that in their actions and their commitment to setting things right in the face of persecution, Witness K and Bernard Collaery have entered the Kingdom of Heaven. Justice is not yet. Persecution continues. Court cases may yet be lost. However, whatever the Court outcomes, the weak voice of truth, which is also the weakness of God,[ii] has not been silenced. God is present. God reigns. 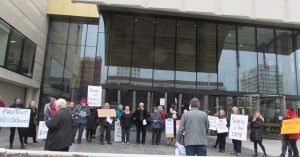