On the 24th of July, Rebekha Sharkie MP gave a speech in the House of Representatives that was memorable in that it succinctly summarised the core of the Christian message. She was responding to the attempt to repeal the Medevac legislation. She said,

I would say to every person in this House who wants to repeal this legislation and who calls themselves a Christian, as indeed I do, to go and re-read Matthew 25:31-46. There is no need for me to quote the entire piece of scripture in this chamber, but Matthew 25 makes it very clear that Christians should see everyone as Christ in the flesh. In the New Testament, stranger and neighbour are in fact synonymous. The golden rule of ‘love your neighbour as yourself’ refers not just to the people you know—your neighbours—but also to those you do not know. And I’m sure I do not need to remind every person who follows Christ that Christ too was a refugee.[i]

I was greatly encouraged by Rebekha Sharkie’s words. At a time when there is so much misinformation peddled by the Australian Christian Lobby and their supporters it was wonderful to see the simplicity of the gospel expounded in our Parliament.

While Christians may differ at times on matters of public policy, there are some underlying principles, as Rebekha Sharkie points out, that should be agreed. Sadly, anyone with a knowledge of history knows that this has rarely been achieved.

In some ways, what is known as the “progressive Christian” movement is the latest attempt to get back to this simplicity, while at the same time respecting the complexity of the modern world. To use Derrida’s term, it is a “deconstructing” of cultural religion. As Jack Caputo has noted, this is a process that Jesus himself engaged in when he addressed the question “Who is my neighbour” and gave an answer which shattered that which had previously been religiously and culturally acceptable.[ii] Understanding deconstruction is not easy, but I was sent a cartoon this week that helped me appreciate it better. 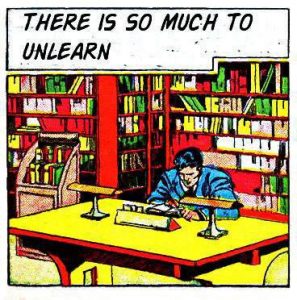 What is it that we most must unlearn? The cultural blinkers that blind us to the good news and get in the road of following Jesus. Those cultural blinkers are tied up with the power structures of our society and how we are enmeshed with them.

Once we start to get beyond these cultural blinkers we begin to see as Christ sees. This is not a new insight. Bishop Gibney writing in 1894 about the killing of 23 Aboriginal people by police in the Kimberley in reprisal for the spearing of a Constable Collins wrote,

A pile of dead victims sacrificed to the ruthless Moloch of Australian civilization, at this moment lies rotting under the tropical sun of Kimberley. And surely every gaping wound in their bodies calls incessantly to the Creator for justice.[iii]

Bishop Gibney had got beyond some of the cultural blinkers of his time. What he saw was shocking. He saw human suffering and at the same time he saw its eschatological significance. He was spurred into action to pursue justice. He trusted in the Christian vision though it put him at odds with the authorities of his time.

Brother Roger of Taize when asked what he meant by trust replied:

Trust takes away your alibi.

I understand that looking squarely at reality – seeing racism, injustice of all kinds – is sometimes just too hard. We look for alibis, for excuses, pretexts that will allow us to run away, pretend the problems aren’t there or that they are for someone else to solve. Not necessarily because of selfishness, but because there are no easy answers, because there are no quick fixes, and perhaps we think there simply are no answers. And society, politics are so thoroughly rotten, it’s just a waste of time to try, right? It’s that kind of reasoning that delivers the perfect alibi for immobility, passiveness.

What does trust say? It certainly doesn’t say that if you try to change something in the broken world around you, success is guaranteed. It says: “You may fail, but you’ve just got to try.” Success is not guaranteed, nor is failure. It invites you to risk.[iv]

Yes. Trust is related to risk. Progressive Christians by trusting that Jesus’ words and actions are still relevant today, risk questioning culturally sanctioned creeds and dogmas that mask the power structures of the status quo. Progressive Christianity fails if it remains at the level of theology and creates a new orthodoxy. Rather, if successful, it propels progressive Christians into the ongoing struggle for justice, the putting of things right[v], the unfolding Reign of God understood anew.