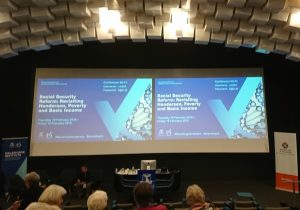 Recently I had the opportunity to attend the Henderson Conference 2018 at the University of Melbourne. Professor Ronald Henderson, led a national inquiry into poverty from 1968-1975. From this inquiry came many wide-ranging reforms including increases to the aged pension. It also saw the creation of the Henderson poverty line, which continues to be updated by the Melbourne Institute, and is used by policy advocates like myself to this day.

The conference brought together outstanding speakers from around Australia all of whom were committed to reducing poverty in Australia. This resulted in truly fascinating discussions and it was great to be among so many committed people.

However, one of the highlights for me was at the conference dinner, when Ronald Henderson’s son William spoke of his memories of his father. In particular he remembered a framed quote from the protestant theologian Reinhold Niebuhr which was on his father’s desk. The quote ran, “Remember, if a thing is worth doing, it will take more than one generation: hence the extreme importance of hope.”

I am not sure how traditionally religious Ronald Henderson was or whether he was a church goer at all. However, it is apparent from his son’s recollections that there was something in the progressive theology of his day that helped guide and galvanise his actions.

As it happens, I had been thinking a little about Niebuhr of late because it was he who championed the Jewish philosopher Abraham Heschel in the USA during the 1950s. For the last 4 months I have been engrossing myself in Heschel’s work, which, though written over half a century ago, prefigures and resonates with much postmodern theology.

Towards the end of his life, Heschel became involved with Martin Luther King in both the civil rights movement and the anti-Vietnam war demonstrations. He was involved with the Selma march and his daughter, Susannah Heschel records, “The greatness of that Selma march continues to reverberate because it was not simply a political event, but an extraordinary moral and religious event as well. For my father, the march was a deeply spiritual occasion. When he came home, he said, ‘I felt my legs were praying.’”

One of the things that Henderson did when he first began his research into poverty was that he sent his young university researchers out into the community to talk with every community group who would listen. They talked about their findings and discussed their implications. In this dialogue, their ideas were tested and they developed a strong sense on how to communicate. I am not sure whether he got this idea from Niebuhr or not, but it is certainly a model which is strongly biblical.

Today, too often theologians and the church have forgotten this and talk just to themselves and those like them. (Perhaps this is why Bishops often appear to be talking gobbledegook; they have forgotten the common language.)

Palm Sunday is coming up. This is a time Christians have traditionally prayed with their feet. In Australia while church attendances have been dropping, those in the secular society committed to justice have taken this festival up. It is now a rally for those who want justice for refugees and for people seeking asylum. What a sign of grace! Though we in the churches have forgotten the covenant, God has not forgotten!

My first challenge then to progressive Christians reading this article: Get out on the street this Palm Sunday. My second challenge is for you to ask your local Minister, Pastor or Bishop to be there as well. 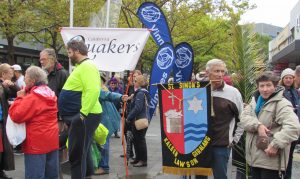