James Cone, sometimes called the father of Black Liberation Theology asked in his last book a challenging question. “How could white Christians, who also claim that Jesus died on the cross to save them, then turn around and put blacks on trees and kill them? That was an amazing paradox: two communities, both Christian, embracing the same faith. Whites even lynched people on church grounds. How could they do it?”[I] 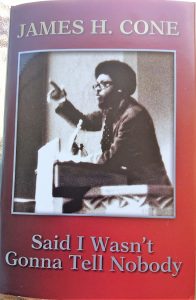 In the week I read this passage I also heard Franklin Graham, son of Billy Graham, and supporter of the Trump administration, talking on the Australian Broadcasting Commission’s Radio National. He seemed sincere, but his espoused Christian faith seemed light years away from mine. His words about God seemed banal and the unreflective repetitions of a certain subculture within both American and Australian society. His observation that America had had a special place in God’s plan because America had helped save the world during the first and second world wars was breathtaking. (The same could be argued for Russia in WWII). Implicit in the world view was an acceptance of an extreme level of violence as part of the providence of a supposedly loving God. As Hannah Arendt might say, such banality is evil. Or Nietzsche, might say, God is dead and the Christians have killed him.

Coming back to James Cone’s question at the beginning, he answers his question in part by commenting that “the cross as a symbol of salvation had been detached from the ongoing suffering and oppression of human beings, the crucified people of history. The cross was transformed into a harmless, nonoffensive ornament that Christians wear around their necks. Rather than reminding us of the cost of discipleship, it became the ‘cheap grace,’ as the German theologian and martyr Dietrich Bonhoeffer put it – an easy way to claim salvation without confronting the power of Christ’s message and mission.”[ii]

As progressive Christians it is relatively easy for us to see the mote in the eye of the fundamentalists. It is harder to see the log of racism, sexism and importantly classism in our own. At least in Australia and Northern America, much progressive Christian thought has come out of a relatively privileged middle and upper class. There is a danger that our “progressive” concepts can just as easily stagnate and become as banal as those of the fundamentalists, if they are not constantly renewed by our standing with and for those who are crucified in our society. Just as in the rich Roman empire, so today, many are crucified by ongoing poverty, unemployment, incarceration and exclusion. These are not just problems of the individual, though individuals experience their effects. They are primarily problems of our Democratic State’s organisation. This is highlighted by the low rates of funding of programs to support the common good (education, welfare and health) while giving tax cuts to the rich (and free passes to the very rich). Progressives, if they are not to fall into the trap of banality and irrelevance and ultimately violence, need theologies that not only support universal compassion, but also underpin the ongoing work of social justice and liberation.