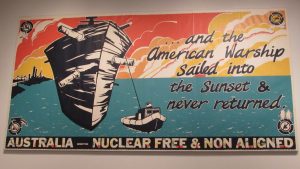 Currently hanging on the wall of the National Gallery of Australia is the artwork The Peace Billboard by Colin Russel and Julie Shiels. The artwork is 30 years old. However, it suddenly became pertinent again this month when Prime Minister Turnbull volunteered to follow the US into a war with North Korea.

Of course, Australia has a long history of following the US into conflicts in Asia. However, there was something chilling in the speed with which the Prime Minister moved to support Trump whose injudicious rhetoric has inflamed an already tense and dangerous situation. Charles Birch, eminent Australian scientist and process theologian, writing in the 1990s of the dangers of nuclear war to both humanity and to the whole Earth’s biosphere wrote, “It is a new world, demanding a new kind of diplomacy and a new logic.” Yet 20 years later, our politicians seem caught in a 1950s time warp where facts and reality can simply be ignored and all that matters is power, and placating a right wing voter base.

There is an urgent need for progressive Christians to pay more attention to the problem of war. Some in the progressive stream espouse a universal pacifism. While I respect their commitment, as well as many of the arguments that underlie their position, I am not sure whether this is the answer for all Christians. In our post-modern age, I tend to mistrust universal answers: they can give a false sense of security in what is ultimately a messy world.

Another approach has been taken by Sarah Sentilles in her book Draw Your Weapons. In it she tells the true stories of a conscientious objector during World War II and a former prison guard at Abu Ghraib that challenges conventional thinking about how violence is waged, witnessed and resisted. Beautifully written, it is part memoir, history, reporting, visual culture, literature and theology. It highlights how the images that we see call us to act. Those who are photographed expect a response. What will it be? As Sentilles points out, sympathy is not enough: Eichmann could at times show sympathy for the Jews whose death he also caused. Sympathy is cheap. Action is more costly and thrusts us into the midst of life. It means both attending to the world around us and imagining a world that is potentially different and then working towards it.

Christians often have difficulty imagining a world without war. Recently I spent time with a Republican American who explained to me how in his view the American armed forces were an integral part of his and America’s identity. This is clearly an identity built on power and might, and many Christians buy into it. It is indeed quite hard to resist. As it happens, shortly after my conversation with my Republican friend, I spent time in Sweden and was surprised to find that they had not been to war for 200 years. I then discovered that little Costa Rica had abolished its army in 1948 and spent the savings on health and education. Clearly, it is possible for some people to imagine both identity and opposition to war in quite different ways.

We are living in dangerous times. Guy Rundle writing in Crikey has recently put the situation and our responsibilities quite succinctly.

“What Trump has done is to remind us that the issues we tackled for decades — starting with the Campaign for Nuclear Disarmament and moving through the disarmament movement of the ’80s — have not gone away. We live in a world of sovereign disjuncture. Presidents are elected kings, prime ministers only slightly less so. Elected versions of absolute rulers from an era of the horse, longbow and musket, they preside over the means of mass death, in a system that simply cannot persist in equilibrium. We have to presume that nuclear war, of unknowable dimension, is in our future, and that the only way to combat it is to transform the form of sovereignty that links words to missiles and mass death by a single, unbroken circuit.

That means for Australia, at the moment, we need peace rallies, good old-fashioned peace rallies, in every capital city. Organised by the Greens, as de facto leaders of the left, together with the churches (my emphasis) and other peak faith bodies, and political and social groups.”

Will going on a peace rally stop war? In itself no. What it might do is help your imagination grow so that you can find ever more creative ways to be a peace maker. It shows solidarity and gives encouragement to all those who have worked unceasingly for peace during the time when we have fallen asleep. In a democracy, it lets politicians know that there are constituents so committed to a more peaceful future that they will protest on the street. It reminds other Christians that the Jesus vision of the Kingdom of God is not one in which there is either a continuing state of war nor nuclear annihilation.

The author supporting IPAN, MAPW and ICAN in letting the Prime Minister know there are more appropriate ways of promoting peace in our region 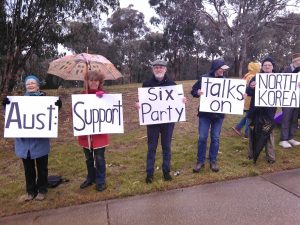