A serious disconnect between political piety and bush fire reality 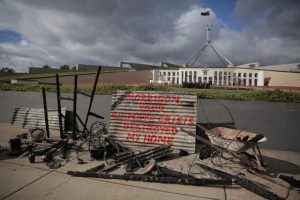 Recently, the spirited and heartfelt protest by Melinda Plesman revealed a serious disconnect in the Australian political and physical landscape.

“Melinda Plesman wanted Prime Minister Scott Morrison to see what she says is the result of his government’s inaction on climate change. So she carted the charred remains of her family home of 35 years from Nymboida, 45 kilometres south-west of Grafton, to Parliament House in Canberra.

Ms Plesman’s home was one of over 600 properties burnt down in bushfires that raged across NSW and Queensland last month.” Written on a blackened sheet of corrugated iron was her message: “Morrison, your climate crisis destroyed my home,” She commented that the Prime Minister’s talk of prayers “was the last straw”.

The religious right has been quick to interpret the meaning of the fires ravaging eastern Australia. Most notorious is Israel Folau’s claim that the fires were God’s punishment on Australians for voting for equality in marriage.

But there are Australian Christians, who stand alongside Melinda, in regarding the fires as not being due to supernatural intervention, but to natural and human-made causes. As regards the latter, such Christians share Melinda’s belief that the extensive, and extending, droughts, the drying up of top soil and its nutrients, the parching of trees and grassland, the increased temperature levels in both our winters and our summers, are in significant measure related to, and caused by, human activity. It is the inexorable consequence of climate change

When there is a serious disconnect between piety and reality, hypocrisy is close at hand. That factor possibly explains Melinda’s anguished rejection of the Prime Minister’s pious line. If prayer is the solution, why haven’t the prayers for rain over the past (and current) years of the drought been answered?

Turning to the Bible can heighten the dislocation. A passage that distinctly addresses this issue occurs in the letter of James. There readers are told that pious Elijah prayed that it would not rain for three and a half years (5:17). So which pious Australians have been praying that there be no rain?

There are varied streams of Christianity in Australia. Some are not only simplistic but callous.

Callous explanations for natural destructive events (floods, fires etc) as being inflicted by God continue to be propagated in some fundamentalist oriented churches.

Progressive Christianity, in contrast, is open to new understandings of, and explanations for, events in nature and in our world. Such Christians are prepared to incorporate and face contemporary understanding of the causes of human responsibility for such phenomena as floods, fires and drought.

When progressive Christians pray, they hear a call to action. In times like this they hear the call not only to help neighbours in danger, but to recommit more fully to caring for the earth and healing the damage wrought by climate change.

This is not some irrelevant academic matter. Human lives (and peoples’ very homes) are at risk. We are witnessing this in current-day Australia.

Nor is this understanding confined to Australia’s environment. This is a global issue.

People on the receiving end of these destructive forces are right to call out the pious (whether they be a Prime Minister or a prelate or a pastor) on the disconnect between a piety that takes no responsibility and the current reality which calls for our urgent and ongoing response.

Dr Ray Barraclough is a member of the Management Committee of