Peter Catt is Dean of St John’s Anglican Cathedral, Brisbane. From 1997 to 2007 Peter was the Dean of Grafton. He helped establish and run the International Philosophy, Science and Theology Festival, which was held at Christ Church Cathedral, Grafton. He holds a PhD in evolutionary microbiology from the University of NSW and a BD from the Melbourne College of Divinity.

His interests include Christian Formation, liturgical innovation, the interaction between science and religion, and Narrative Theology . He is a member of a number of environmental and Human Rights organisations and has serves on Anglican Social Justice Committees at both Diocesan and National level. He is the current chair of The Australian Churches Refugee Taskforce.

Tiffany Sparks is Archdeacon of the Anglican Diocese of Grafton.

Previously she was Priest in Charge of St. Paul’s Anglican Church Ashgrove in Brisbane where she has served since 2012. Some of the most influential conversations of her young life were theological and philosophical in nature, encouraging her to reflect and continue to reflect deeply on what being a Christian means and what that tells us about how to serve each other with love, respect and dignity. Tiffany has always been fascinated in how we develop as a culture, developing cultural norms and community narratives. Tiffany holds degrees in Social Sciences and Theology with honours in Pauline Literature. Tiffany went on to be ordained in 2010 after working as a seasonal tutor for ACU in the department of theology during her honours year and working for Griffith University as Chaplain. Previously Tiffany was been involved in creating young mothers groups in Western Queensland, refugee and homelessness advocacy.

After having her child at a young age, Tiffany is particularly concerned with people on the margins, who feel excluded from God and Church and seeks to make the Church more accessible to everyone. Tiffany is also interested in exploring the online space with campaigns like repent4lent.org, where people are encouraged to reflect on current society and in 2014 St. Paul’s became the first mainstream Church to accept Bitcoin (crypto currencies).

Tiffany is married to Grant Sparks and has a blended family of 6 children.

Deborah Bird is an Anglican priest currently based in Toowoomba.

After nearly twenty years in music education, Deb has an interest in ritual that builds community, and promotes a sense of church with belonging at it’s centre. She enjoys contemplative practices, creative liturgy and holds particular concern for climate justice.

Deb has been involved in local branches of Equal Voices and ARRCC (Australian Religious Response to Climate Change), and enjoys bringing ecumenical and community friends together for conversation and collaboration.

I am a 1971 model, male human. I was born into a strong Anglican family in the Latrobe valley in eastern Victoria. Growing up with parents who combined Christianity and unionism it is probably only natural that I am drawn to Progressive Christianity.

My work experience has included time as a dairy farmer, working in grounds maintenance at a tourist park and factory labouring. I studied a Bachelor of Theology by distance education through St Marks National Theological Centre in Canberra, which I completed in 2015. My studies are currently in the Master of Secondary Teaching at Australian Catholic University, Brisbane Campus.

I am married for the second time and live in Brisbane’s eastern suburbs with my wife. We belong to a small, loving Anglican community located on Brisbane’s bayside.

I am politically active and regularly involved as a volunteer in campaigns at all levels of government for my preferred party. It is always my goal to bring a Christian voice to this environment, and especially a progressive Christian voice when the conservative one seems to dominate.

One of my favourite activities is to discuss faith and politics while sharing a nice whiskey, wine, beer or coffee.

Ray Barraclough grew up on a farm near Clermont in central Queensland. He majored in history at the University of Queensland before working as a high school teacher for three years at Childers. He then went on to study at Moore Theological College in Sydney. On completing his studies there, he enrolled at Macquarie University to research his doctoral thesis. In his doctorate he explored a range of political ideas that are to be found amongst the New Testament writers.

Ray was ordained as an Anglican priest in Brisbane diocese in 1975. In that diocese Ray has served as a parish priest, university chaplain and theological lecturer.

Ray served his curacy at St James’ Anglican Church in Toowoomba. He then became Rector of St John’s Church, Upper Mount Gravatt. From 1979 to 1988 he was the Anglican Chaplain to the University of Queensland.

During the late 1970s and 1980s Ray was involved with Concerned Christians that was an ecumenical coalition of Christians in south-east Queensland who were concerned about the erosion of civic rights and wider political malpractice that were a feature of Queensland’s political landscape during those years.

From 1989 to 1993 Ray and his wife, Dorothy, served at St George’s College, Jerusalem, where Ray was senior lecturer. Subsequent to his return, he was the founding President of Friends of Sabeel Australia Inc [FOSAI]. FOSAI seeks to give support to the vision and activity of Palestinian Christians, and especially to the Sabeel Ecumenical Liberation Theology Center in Jerusalem.

On returning to Australia, Ray took up an appointment as lecturer in New Testament at St Francis’ Anglican Theological College in Brisbane. Concurrent with that position he was also a member of the ecumenical lecturing team drawn from Brisbane’s Anglican, Catholic and Uniting Church seminaries.

While now living in retirement, Ray has been intimately involved in the establishment and lobbying activities of A Progressive Christian Voice (Australia) Inc. 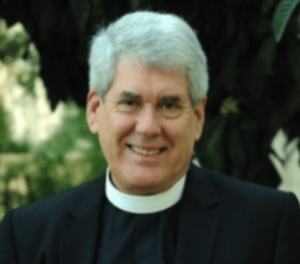 Greg Jenks is an Australian religion scholar and Anglican priest serving in the Diocese of Grafton on the north coast of New South Wales. He is an adjunct a Senior Lecturer in the School of Theology at Charles Sturt University. Greg served as Dean of St George’s College, Jerusalem (2015–2017) and was Academic Dean at St Francis Theological College, Brisbane between 2008 and 2015.  He is a Fellow of the Westar Institute, and served as its Associate Director 1999-2001.

Dr Jenks  was awarded a PhD by the University of Queensland for his research into the origins and early development of the Antichrist myth. He has a long-standing interest in Christian origins, and is a co-director of the Bethsaida Archaeological Excavation in northern Israel where he serves at the project’s Coin Curator. He is also the Executive Director of the Centre for Coins, Culture and Religious History at St John’s Cathedral in Brisbane.

He is currently editing an international collection of essays: AFTERLIVES: Jesus in Global Perspective (forthcoming 2021). Other recent publications include The Once and Future Bible (Wipf & Stock, 2011), The Once and Future Scriptures (Polebridge Press, 2013), Jesus Then and Jesus Now (Morning Star Publishing, 2014) and Wisdom and Imagination (Morning Star Publishing, 2014).